Over the past 12 months, I’ve been truly saddened to see splits and divisions emerge within our movement.

SO WHY ARE YOU REFUSING TO BACK THE LEADER WITH AN OVERWHELMING MANDATE FROM THE MEMBERSHIP? YOU AND OWEN ARE THE PROBLEM AND THEREFORE ARE UNLIKELY TO OFFER ANY SOLUTION

As a united movement we created the NHS, we introduced the Minimum Wage, we fought for workers’ rights. But divided, we serve only to let down the millions of people who desperately need us to stand up to this right-wing Tory government.

TORY-LITE IS NO ANSWER TO TORY GOVERNMENT. LOOK AT THE BLAIRITE RECORD AND LEGACY AND TELL ME YOU ARE NOT ASHAMED OF THAT.

If you are still undecided I think the attached link will help explain why I think you should support Owen.

AS YOU MIGHT GATHER, I AM NOT REMOTELY UNDECIDED. PLEASE TELL ME THAT THIS COLLECTION OF LAME VIDEOS HAD NO INFLUENCE ON YOUR DECISION TO SUPPORT OWEN. ED MILLIBAND? SERIOUSLY?

I joined the Labour Party for the same reasons you did. I believe passionately in the principles of fairness and equality that underpin everything we stand for. I want to take those principles and turn them into real policies that can change lives.

I WOULDN’T PRESUME TO KNOW THE REASONS YOU JOINED THE PARTY, BUT IT VERY CLEARLY IS NOT THE SAME REASON AS ME. I REJOINED AFTER c.30 YEARS TO SUPPORT JEREMY CORBYN AND THE DIRECTION HE WANTS TO TAKE THE PARTY AFTER THE CATASTROPHIC LEGACY OF THE BLAIRITE YEARS.

Having worked closely with Jeremy, I know we can’t do that under his leadership. We saw for ourselves that he couldn’t give clear leadership on complex issues like the European Union, or undermined colleagues like Lilian Greenwood, who were doing their best to serve him and serve our party.

IN WHAT CAPACITY HAVE YOU EVER WORKED CLOSELY WITH JEREMY? CRITICISM OF HIS LEADERSHIP OVER THE EU REFERENDUM HAS BEEN THOROUGHLY DEBUNKED. AS FOR LILLIAN GREENWOOD, HER ‘BEST’ WOULD HAVE BEEN TO SIT TIGHT AND RIDE OUT THE STORM BEING CREATED BY AGITATORS RATHER THAN DEMONSTRATE HER OWN WEAKNESS AND JOIN THOSE DOING THE UNDERMINING OF THE PARTY.

Labour’s never been more needed, but we’ve never been less effective. That’s why I’m supporting Owen Smith to be the next Leader of the Labour Party.Owen is a proud and passionate socialist. Someone with the radical ideas we need to take the fight to the Tories, and the credibility to take us back into government. With Owen, we will have the policies, the principles and the passion to unite the Labour Party and take our movement forward.

LABOUR HAS BEEN INEFFECTIVE FOR YEARS DUE TO ITS ABANDONMENT OF ITS CORE VALUES. SUPPORTING A PROVEN BLAIRITE LIKE SMITH, WHOSE VALUES ARE MORE FLEXIBLE THAN A GOLD WINNING GYMNAST, IS DEFINITION OF LUNACY – “During the leadership contest, he’s managed to rack up a disturbing collection of gaffes over a short period of time which have served to highlight his hypocrisy.”

OWEN SMITH IS PATENTLY EVEN LESS OF A SOCIALIST THAN YOU ARE. VOTING RECORDS, CONSTITUENCY ACTIVITY, PREVIOUS EMPLOYMENT. SHAMEFUL AND SHAMELESS. BOTH HIM AND YOU.

The media clamour over the crowded-train non-story demonstrates just how easily the corporate media (that very much includes the i as it is run by aspiring media baron Ashley Highfield, who is trying to do a deal to supply BBC its local news) and big business interests (and they don’t come much bigger than Richard Branson) can manipulate the agenda. 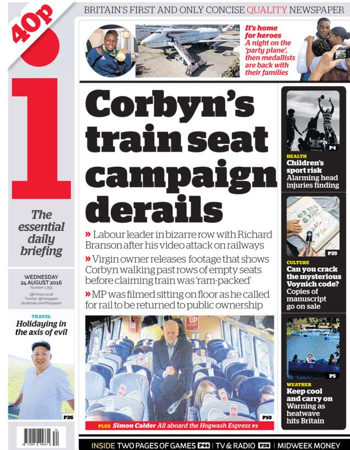 This story rumbles on as it serves multiple purposes to vested interests.

2. Similarly, the huge traction that calls to re-nationalise the railways is beginning to finally gain must be anathema to the corporate owners of our railways such as Virgin Trains, who continue to make big profits while we pay the highest fares in Europe, if not the world.

3. So, to deflect from these uncomfortable debates, that socialists can have a field day on, the puppet masters ensure that what is deemed far more important is Jeremy Corbyn’s integrity. Did he really choose to sit on the floor when there was a vacant seat or two on the train?

I am not going to dignify such a question with any sort of answer. It is irrelevant in every possible sense. What is relevant is that we are being railroaded (excuse the pun) into focussing on the ‘Cult of Corbyn’ at the expense of the real reason for my, and most other ‘Corbynista’s’ excitement over his accession to the leadership of the party, namely that for the first time in living memory we have a tangible prospect of some genuinely socialist government in this country, allied to a real and substantial threat to the neoliberal hegemony that needs to be brought down if humanity and, indeed the whole planet, is to have a sustainable future. These are questions at the opposite extreme to whether there was a spare seat on a train or not. They are questions that the establishment and and corporations cannot abide.

I really couldn’t give a flying whatever whether Corbyn is capable of cheap stunts and the odd porky; whether he is or is not just like every other politician in this sense. I do believe that he has, at the very least, vastly more integrity than the vast majority of MPs, but that may well be damning with feint praise and I would not be shocked or completely crestfallen if this proved not to be the case. The crucial thing is the direction in which he wants to steer the country. There can be no doubt that he will do his best to steer us towards that fairer, more equal, more compassionate and more sustainable place we need to be. That is good enough for me. This is the agenda we need to focus on, not ‘Corbyn the Messiah’, as our socialist objectives have to outlive Corbyn, or it is all a waste of time.

I’ll leave you with this sobering observation from the great George Carlin:

This evening, I attended Owen Smith’s love-in at the Llantrisant Leisure Centre.

Credit where it is due, it was a lot better attended than I expected, with somewhere between 200 and 250 cramming the room, including a selection of MPs and AMs ) I recognised Chris Bryant and Nia Griffiths for example). I am not going to go into Smith’s speech as we have heard it all before. It was Smith polishing his delivery in front of a friendly audience, and it was indeed pretty polished, complete with his “thumb of power” to the fore.

The tactics have become quite clear. A year ago, Jeremy was unelectable because he was too left, too socialist, according to his opponents. Owen no longer pushes this line. Indeed, he tries his damnedest to persuade us that he is just as much a socialist and just as radical as Jeremy (despite the copious objective evidence to the contrary), but that Jeremy is now unelectable because he is weak in his opposition to the Tories; that he lacks sufficient wit at the dispatch box; and that attracting record levels of membership and being the draw for huge rallies does not translate into being a credible government. These are, of course, subjective criticisms that we will always differ on.

After his prolonged monologue, he took a Q&A session. I have to admit, I felt somewhat intimidated as there were repeated insinuations of a Corbyn personality cult; Momentum being ‘the child of Militant Tendency’;of rising problems of anti-semitism and misogyny on Corbyn’s watch etc. At my most confident, I would have spoken up and faced up, but I bottled it, feeling that it would not have been taken as a constructive contribution, as it was far from any sort of debate. This was re-enforced by the fact that Smith seemed to know just about every questioner by name. He repeatedly stressed how this was his home patch, and I soon felt like an interloper at family get together. Some were quite overtly aggressive in their tone and urging Smith to go on the attack a lot more. Smith stated that this would be coming.

He dodged one particular question about what Smith saw happening after this election, choosing to leave it the end. And he was quite explicit and blunt about it.

If he wins, he will unite the party (no hint of how), take the fight to the Tories (presumably via witty retorts at the despatch box), and lead the party into government (obviously).

If Jeremy Corbyn wins the party will split. Simple as that.

Considering the NEC elections and all other indications make Smith winning nothing but a remote possibility, I can only assume that Smith, Bryant and company have already prepared said split.

On the way out, a gentleman asked me what I had thought about the evening. I told him that was wondering whether people like him were likely to follow Smith out of the Labour Party and into some sort of SDP v.2. He said, “Do you really think it will come to that?” “Depends on whether you believe anything he says”, I said.