Yesterday was a day of mixed emotions, for me at least, as I went with the South Wales delegation of Frack Free Wales activists (representing local groups from Llanelli, Swansea, Bridgend, the Vale, Llanharan and Monmouth) by coach to Upton, near Chester. We joined an assembled throng of c. 400 like-minded people from all over England & Wales – Lyme Regis, Brighton, Kent, Lincolnshire, Leeds, Manchester, Blackpool, Aberystwyth, Bath, Somerset, Nottingham, Hull, Tyne & Wear etc. etc. All those present were effectively delegates of their local groups and communities; millions of people now united in opposition to this multi-faceted menace we call fracking.

Upton village had never seen anything like it. It is a sleepy little suburb of Chester, but it was not asleep on this day. The fractivists assembled in the car park of Upton Park which was awash with colourful characters, banners, placards and even 10 feet tall dinosaurs! The park’s pavilion was open to provide toilet facilities and a tuck shop, while a range of stalls were set up to provide hot veggie food, pasties, cakes and hot drinks, along with a collection point for clothing donations for the camp residents that had lost their belongings in the camp eviction a few days earlier, more of which later.

We then set off on a slow procession through the streets of the village to the site of the Community Protection Camp, a couple of miles away. This obviously caused some disruption for local residents as some roads were closed off to traffic to facilitate us. But everyone we encountered was hugely supportive. I personally apologised to a couple of car drivers stuck in the throng for what must have been held up for 10/15 minutes as we passed. They just smiled, and said ‘no problem’. One thanks us for taking the trouble to come to his village to help protect them from the frackers. Dozens of residents, young and old alike, came to their front gates in the bitter cold (it didn’t get above 4 celsius all day) to wave and cheer us on. Many more dozens were at their front windows, smiling, waving and giving us the thumbs up. I saw no more than one or two grumpy faces all day. It was all very uplifting and reassuring to see the level of community support we clearly had.

Then we left the housing behind and were in the rural lanes leading to the proposed drilling site, and things immediately started taking on a somewhat more sinister feel. By now, the musical accompaniment we had was being joined by the constant drone of a police helicopter circling overhead. It remained above us for what must have been close to 2 hours, maybe more, at a cost of many thousands of pounds of taxpayers money, for what conceivable reason? We then passed the landowner’s residence, which had a whole minibus squad of a dozen heavily kitted out officers across the entrance.

The whole mood became much more sombre on arrival at the site. The site had been occupied continuously since April 2014. It had become the home for a small band of full-time residents and the hub for regular community engagement and support. 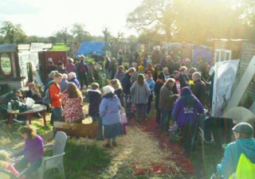 However, the sight that met us was more akin to a WW1 battlefield, and it induced similar feelings:

The site had been razed to the ground, after an eviction order had been served, by a combination of a massive police operation (interestingly with Welsh signage on the vehicles and officers – which I am not sure is normal for Cheshire police!), and the dubious services of Swansea-based eviction ‘specialists’, UK Evict Ltd. (Note to self: investigate this company and its connections!)

The Solidarity Day had been planned some time ago, and I don’t suppose it was any coincidence that the eviction was enacted in the week before it. It just highlights that this whole campaign has become an attritional war, and a battle of wills. They have no idea what they are up against. I spoke to numerous residents of the camp and they were all remarkably upbeat and philosophical. They knew this was coming from day one. They know they can rebuild it, and enjoy doing so. They know they have the support of the local community and the fractivist movement across the country and beyond. They know they are winning. And here is the proof of that, in the form of Upton-frackers Igas’ recent share performance: 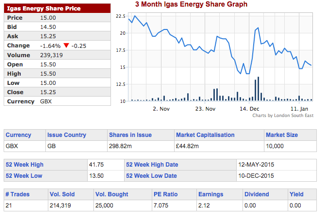 Bye-bye IGas!! The writing is on the wall. Just as it is for Gerwyn Williams and his rag-bag collection of skint companies like Coastal Oil & Gas and UK Methane. They are not even big enough to have a share issue, and plans to try to have a share issue seem to have fallen by the wayside, presumably because he could not give them away!

So overall the day was a huge success. It was a long way to go to spend 5 hours out in the bitter cold, strolling around a remote part of the country that few have any real connections with. Yet all of our party, and I am sure just about everyone in attendance left with a satisfying boost of affirmation that we a part of a huge widespread community of people fighting a just and vital cause. For me, and many others, it is part of a bigger picture too. It is part of a battle of competing values and nothing short of an ideological war being waged by the tory establishment. A couple of things about the Solidarity Day highlighted this for me.

I have already hinted at the ridiculously over-the-top policing operation. Let me look at this in a bit more detail. With my own eyes I counted in excess of 100 police officers, 7 or 8 minibuses that presumably brought these squads in, at least 6 officers on motorbikes and about 10 police cameras. Not forgetting the helicopter presence that must have cost at least £5,000 alone. Total cost? It has got be somewhere in the £10k to £20k range. For 400 peace-loving, community-supported citizens.

Isn’t just amazing how readily money can be found for such over-the-top operations in these times of austerity? Wouldn’t it be nice to witness a bit of over-the-top healthcare or over-the-top educational provision occasionally? Which brings me nicely to the other sight that jarred with be as we were being herded along our route.

Along the way we passed this Upton Clinic. This image is from July last year, when the clinic was still operational and providing valuable and valued services for the community. 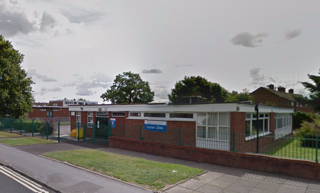 It now has a ‘For Sale’ board on it, with the pernicious statement “Development Opportunity” on it. Should you be interested, the particulars are attached at the end of this piece.
Why pernicious? Well, this is not just a short-term austerity measure. The clinic is not being moth-balled until better times, when it can be re-opened and renew its work. It is being permanently disposed of, bulldozed and built all over. It will never be able to return, its place in the community permanent;y and irrevocably deleted. A permanent impact and legacy of Camoronic and Osbornomic ideological assault on our communities. 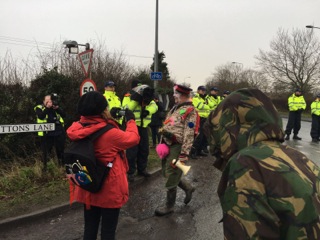 If you think that last comment is a bit paranoid, then let me share some other information obtained directly from officers manning the many cameras. They looked like the sort of video recording cameras news reporters carry around these days. I asked one officer what happened to the recordings. He said, “You don’t need to worry about that, these cameras aren’t recording anything. They are live-feed cameras into HQ.” “You what?” I spluttered. The officer explained: “It means they can monitor the situation and respond accordingly“. “And identify the trouble-makers?” I asked. “Well, yes of course” the officer replied.

Respond accordingly? WTF does that mean. It certainly didn’t mean telling all these surplus officers that they were obviously not needed and could go home in time for the football results. Could it possibly mean that there were reserve forces on standby somewhere to come a deal with the riots and start of the revolution? Who knows? Somebody knows.

It wasn’t just cameras either. While in the Park car park at the beginning and end of the event – where everybody was together – a police camera crew positioned themselves across the road and was constantly scanning the assembled crowd. A couple of those nice friendly Police Liaison officers, the ones with the nice big pale blue bibs, were station don the edge of the gathering and ‘engaging’ with people. You know, those nice friendly chats about where you have come from and were you having a nice day etc. During such chats, it was not just cameras monitoring the discourse, but those amazing bits of microphone technology that can pick up distant conversations. Let us hope they di not pick up us plotting the assassination of the Cabinet, the bombing of Buckingham Palace and the cyber attacks on the stock exchange that we were all plotting. But I have said too much!

We keep winning the occasional battle, but I fear we are losing the war. Not the war against the frackers. I am confident that one can be won still. But the wider schisms and increasing inequalities that the Tory’s ideological assault is wreaking on the huge sections of society can only end one way, I suspect. It is likely to get ugly. But we have the good people on our side.