Nothing is more likely to press my buttons and get me responding than misguided praise of churches, and the Catholic Church in particular. It is something that I think is particularly appropriate for any green leftie to address as it is central to how religious belief has become a key tool of right-wing regimes around the world, but especially noticeably in the USA and UK currently. Religion is fundamentally right wing in nature because it is based on oppression, control and superiority complexes. The fact that the Jesus dude would appear to have made a good socialist, if you actually listen to what he was purported to say, is an irony that escapes most because it is irrelevant.

I have recently had conversations with a couple of people that I greatly respect, who are not particularly religious (I can respect religious people btw – just not religious beliefs or institutions) but who were being apologists for the Christian churches on the basis that they do exceptional charity work, especially in places like Africa, or in giving shelter to the local homeless (for one particularly cold night only). My robust challenging of this perspective on social media didn’t go down particularly well, leading to one of the threads being withdrawn, I suspect because the owner of that thread was wary of who else may see it given that she feels she has no choice but to send her children to a Catholic school. I guess we all have our crosses to bear!

But what of the assertions themselves?

When you break these definitions down you begin to realise that charity is not the unqualified good that many seem to believe it to be. Indeed, many ethicists have major issues with the whole concept on, among others, these grounds:

This last point brings me back nicely to my issues with Christian charity. It always come with strings attached, usually for both the distributors of that charity and the recipients.

Why do Christian do charitable work? Because they are told to. They do it primarily through their own charities rather than join in the work of secular charities with different agenda. They do it because it is part of the reward and punishment regime imposed on them by their church, as set out in many biblical quotes:

I swear I remember this last one so well because I heard it so often (just before the collection plate was passed around) in my days as a church goer. If all this cheerful giving was so beneficial, its hard to see why there is so much poverty and strife in the world. But then again, the Catholic Church is that bit more hypocritical than most. You don’t become, arguably, the wealthiest institution on the planet by giving all this money away frivolously!  It has a long and well-established history of shameless wealth accumulation. Churches have historically sought tithes of around 10% of its parishioners earnings, and I’d be surprised if they spend more than this % of their vast incomes year on charitable works. Getting figures for any of this is nigh on impossible of course.

The quote from James 1:27 is particularly poignant. The Catholic Churches ‘work’ with orphans has, of course, been particularly pernicious. The endemic pedophilia amongst the clergy has highlighted the wisdom of hanging on to substantial reserves. Compensation claims run to many billions of pounds for claims that are just the tip of an iceberg. And of course, that most celebrated of orphan preyers, Mother Teresa, has long since been exposed (but such sound minds as Christopher Hitchens and Tariq Ali, among others).

As for Africa in particular, a paper entitled “The impact of Christianity on Sub-Saharan Africa” by Matsobane Manala of the University of South Africa came to the following conclusions: 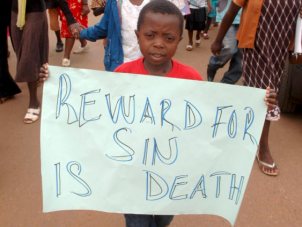 This last point has been thrown into greater focus with the recent ‘epidemic’ of violently oppressive homophobia in Africa, in no small way fanned by the ‘charitable’ works of US evangelical Christians. But this is not a new phenomenon. Anti-gay laws were introduced to Africa from the earliest days of Western colonialism.

In conclusion, charity of any sort is a dubious and ill-conceived enterprise more often than not. It diverts attention and resources away from achieving lasting solutions to humanitarian issues. But when it is driven by religion, it is particularly pernicious. It trades a vaccination or meal for the imposition or entrenchment of misogyny, inequality, bigotry and abuse. And all for self-indulgent motives rather than a genuine desire to change the world for the better.

A good starting point, for that better world, will be ousting Christian Conservatives like Teresa May and Donald Trump and replacing them with atheistic (understandably reluctant to label themselves outright atheists) socialists like Jeremy Corbyn and Bernie Sanders. These elections are where we need to focus our charitable instincts and cash!

P.S. I do support a few carefully chosen charities that focus on lobbying Governments directly, and/or direct action, for the kinds of change humanity as a whole needs to see. These include Amnesty International and Greenpeace, for example. 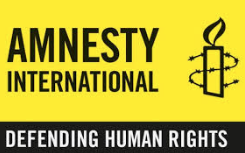 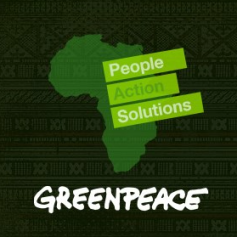