The Director of one of Wales’ leading environmental organisations, Sustainable Wales, is backing the proposed Swansea Bay Tidal Lagoon.

Margaret Minhinnick, Director of Sustainable Wales says that the project will have a key role to play in generating the promised 15% of energy from renewable sources by 2020.

She said, “Based in Porthcawl, Sustainable Wales has been aware of the potential of tidal energy from the Bristol Channel for many years. We believe this project is a realistic one, both in terms of cost and the amount of energy it will produce. We also saw at first hand the recent extraordinary storms in the Bristol Channel. The forecast from the IPCC (International Panel on Climate Change) is that the regularity and violence of such storms will increase with climate change. Renewable energy HAS to be part of the answer to this.”

“As a nation, we have to reduce our carbon emissions by 750 million tonnes between now and 2030. We also have to reduce the use of fossil fuels by 20-30% against their projected use in 2030 and we aspire to a lead scenario of 30% of electricity being generated from renewable energy. That’s a huge challenge for us all at a time when climate change is threatening the basic elements of our lives,” she says.

“Swansea Bay Tidal Lagoon will produce 9% of Wales’ domestic energy needs and will provide carbon savings in excess of 236,000 tonnes per year, contributing to the commitments made by the UK to reduce emissions at the international level. What’s more, as the first of a potential network of lagoons that could provide up to 10GW of reliable, renewable generating capacity, Swansea Bay Tidal Lagoon is an essential first step in the UKs fulfilment of renewable energy production targets and emissions reduction at the EU level.”

“As a sustainable development body, we advocate good practice by citizens, producers and politicians. Swansea Bay Tidal Lagoon will help us to reduce our carbon footprint and give Wales the opportunity to be at the forefront of an alternative energy future that is clean and green.”

As you will see, your request to Peter Barnett has been passed to me. With a geology/geography academic background, I guess I have become seen to be one of the Green Party’s leading authorities on fracking. It has very much become my specialist subject over the last 4 years.

What you ask for is nigh on impossible to provide for two principle reasons.

Firstly, “indisputable” is a standard that does not exist. The scientific method invites that everything we hold to be true or fact should be capable of being disputed in the light of more evidence. More evidence is constantly emerging about fracking, and while nearly all of it adds to the case against fracking, it is certainly a matter of dispute as to how significant any of the evidence is. This is what allows people to adopt different standpoints, irrespective of the evidence.

However, I may be able to help with this. Indeed, it is a problem I was commissioned to address for the Frack-Free Wales organisation. I have produced my own report, attached, entitled A Review & Synopsis of the Scientific and Technical Evidence Against Hydraulic Fracturing. It summarises, fairly superficially, the main technical and scientific areas of concern – but in doing so points to all of the most thorough and compelling specialist reports on each area of concern (although please bear in mind that this was published 12 months ago now).

I hope you find it useful.

Hi Andy
Could you help fulfil the request below? If not, please let me know so I can go elsewhere.
Copy me if you can ‘cos I’d find it useful too!
Cheers
Peter

Hi Peter,Can you tell me THE single most indisputable report or study that puts the case against fracking in UK please?
I need something to convince scientifically minded friends and I just dont have the ‘killer’ facts, partly because there is too much sensational stuff out there. If I see another flame coming out of a tap I will go mad – its so much more serious than that isn’t it?

It confirms that UK homeowners are likely to face the same prospect as US homeowners in frack zones – namely insurers specifically excluding the impacts of fracking from their policies.

It also confirms that insurers have serious concerns over the possible health impacts of fracking activity.

It points out that 30% of the UK is vulnerable to the frackers – and that homes are likely to become not just uninsurable, but unmortgageable and unsellable.

Unlike Americans, who can trade off the risks for the lucrative gains (short term at least), with menial rights held by the crown in this country, residents here would have to live with all the risks – without any prospect of sharing in the potential rewards. Even those of a Tory/capitalist disposition cannot, surely, tolerate this!! 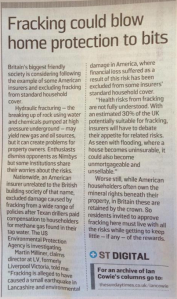 As a former teacher who threw in the towel 10 years ago (almost to this very day), I can assure you that this is an accurate, eloquent evocation of a classroom teacher’s perspective.

The Green Party’s striking “slime child” party political broadcast from the 1989 EEC Election in which we won a record 15% of the UK vote.

Joining in the spirit of the forthcoming weekend we have decided to create an event of our own. Accompanied by some some great jazz we will be serving homemade bread, soups, sandwiches, cakes and fairtrade refreshments.
Hope you can call in.

Sustainable Wales is an environmental charity. Committed to sustainable development, we focus on society, economy, jobs, creativity and the arts and their inter-connection with the natural world.

My eldest son did very well at Brynteg School and is now at Cardiff University. My younger son has also done well there and is currently in the Sixth Form.

In fact, it has been described as “the greatest rugby player factory Wales has ever known”

Also on the Alumni list are a couple of prominent politicians – but their legacies are unlikely to be seen as anywhere near as glorious!

Most in Bridgend will know of Carwyn Jones – Bridgend AM and First Minister. Sounds impressive, but as time goes by his leadership of Wales, or rather his lack of it, is becoming the stuff of infamy rather than fame. He is now widely characterised as having just one standard response to any issue:

“Blame London for Everything”

This has certainly been his response whenever we attempt to engage him in the fracking debate, and seems to be what he expects all Welsh Labour politicians – especially in Bridgend – to do whenever possible. Our attempts to engage local Labour councillors in the fight against the Bedroom Tax meets a similar response. They seem to think that letting people suffer at the hands of the callous Tory Bedroom Tax can only be good for them when it comes to election time. But such cynical callousness underlines just how much Labour are now little more than Red Tories.

Until recently, you may not of heard of the other political heavyweight from Brynteg’s alumnus.

Born in Woverhampton, but brought up in Bridgend and educated at Brynteg, that education led her to join the Conservative Party at the age of 19 and on a journey as a career politician that has now been revealed to be of the very kind that repulses us all, and makes us despair for our democracy.

The truth of her criminal ripping off of the taxpayer is, perhaps open to some further debate and investigation, but here is a pretty generous viewpoint:

Some suspect the extent of her nose-in-the trough activities could be many times worse than this, and yet she still, as I write, has the full backing of conspirator-in-chief David Cameron.
Meanwhile, Caroline Lucas MP, goes on trial for a peaceful protest against ecocidal fracking. This is going viral on Facebook: 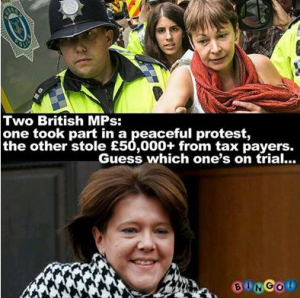 This makes us proud to be in the Green Party, if not so proud to be from Bridgend. Bridgend has, of course had little to do with true blue Tories like Miller since 1987, when its last Tory MP was voted out. The Bridgend electorate now has to decide how to deal with the Red Tories of Carwyn Jones’ Welsh Labour. We cannot keep relying on our rugby players to give us any sense of pride!