There was some very encouraging news in the battle to prevent critical climate change in the Independent / i newspapers yesterday.

“Scientists and economists have joined forces to launch a global research initiative to make green energy cheaper than coal within 10 years, a target they believe is critical to avoid dangerous climate change. They have compared the goal to the Apollo programme of the 1960s when the United States stated that it would put a man on the Moon by the end of the decade.

Leading academics, including former government chief scientist Sir David King, past president of the Royal Society Lord Rees, and economists Lord Stern and Lord Layard, in effect said that the world cannot be saved from global warming unless coal – the dirtiest fossil fuel – is put out of business. 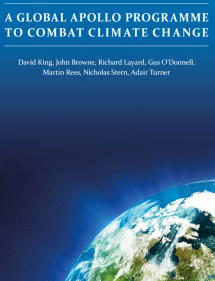 They have called the plan the Global Apollo Programme and hope to recruit countries from around the world in an international commitment to boost research and development into key areas of renewable energy, storage and electricity transmission.”

However, my innate cynicism kicked when I spotted our old ‘friend’ Lord Browne amongst the seven authors of the report. This man has a oil and gas coursing through his veins:

As reported by Sky News,  Lord Browne’s reshuffling of his business portfolio comes as capital-rich global investors target an array of opportunities thrown up by the slump in oil prices.

Since Riverstone Energy listed in London, raising hundreds of millions of pounds, it has bought stakes in nearly a dozen businesses, including the Calgary-based Canadian International Oil Corporation, Castex Energy, which explores for oil in the Gulf of Mexico, and Sierra Oil and Gas, which is focused on Mexico.

Lord Browne’s connections across the international energy sector are designed to assist L1 Energy at a time of acute political sensitivity, highlighted when the UK Government indicated in February its intention to block the fund’s purchase of a number of North Sea gas fields. Watch this change now.

In addition to his role at the listed Riverstone vehicle and its private equity firm, Lord Browne has also relinquished the chairmanship of Cuadrilla Resources, the privately-owned fracking company which has faced opposition to its efforts to extract gas in parts of the UK.

He recently stepped down as the Government’s lead non-executive director, a post that involved co-ordinating the appointment of dozens of private sector figures to the boards of Whitehall departments.

So, all of a sudden, we are expected to believe that this man is hoping to save us from climate catastrophe. I think not.

The not-very-well-hidden agenda in this Global Apollo Programme (GAP) is the explicit aim of putting COAL out of business. The academics involved rightly point out that coal is in many ways the dirtiest and nastiest fossil fuel, and there are sections looking to boost research and development into key areas of renewable energy, storage and electricity transmission. But what, if any, of this is exciting Lord Browne?

Although not explicitly mentioned in the GAP report, what I suspect and predict Lord Browne to jump up and down about is the evil that is coal. This will lead to him trying to re-incarnate the corpse of the “bridge fuel” fallacy (neatly summed up here ), to the clear and obvious benefit of his oil, and more specifically, gas fracking interests.

So what of the other authors of the GAP report?

So what should we make of the Global Apollo Programme?

Read it. It is good stuff, but nothing new and little more than a good ‘A’ level geography project based on existing published resources that we have been using for years.

That it is written by a bunch of establishment cronies can be taken at least two ways. Firstly, it could be taken as a positive sign that the establishment is finally prepared to take the whole issue seriously at last. I might be prepared to accept that had Lord Browne not been involved. Personally, I think the whole thing is going to be used as a way of softening the public up to the onslaught of fracked gas as a purported ‘bridge fuel’. Some of the signatories may not have that as their primary intention – but I, for one, see no reason to suspect that Lord Browne is anything but the dirty fracker he has always been.