The new Senedd has only been back a few days and yet the toxicity of UKIP’s presence is already being felt.

Witness the vitriol aimed at Plaid Cymru for having UKIP AMs backing Leanne Wood‘s candidature for First Minister. Witness UKIP AMs also making unwanted overtures towards Labour. Any association with them, invited or not is pure political poison.

As someone who has supported Greens and Lib Dems at times in the past, and knowing the true values of those parties and the hard honest toil of many of their members, to see UKIP come from nowhere to claim not just a token seat, but a 7 out of 60 seats simply appals me. Lib Dems and Greens have one between them. 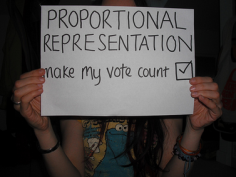 Only truly proportional representation ensures no place for tactical voting. With 60 seats available, truly proportional representation would give a seat for even 1.7% of the vote achieved. Under FPTP, Labour won 27 of the 40 constituency seats – 67.5% of the seats for 35% of the votes cast. Even under Additional Member hybrid system, Labour still achieved 29 seats , or 48% of the total, that still significantly overstates the level of support they actually have.

Working with what we’ve got, there is still a crucial role for tactical voting, not just in the established manner in FPTP votes, but also in the top-up list system used in Wales, the system that provided us with all 7 of The new UKIP AMs.

The crucial thing to grasp here is that due to their dominance in the constituencies, they can generally achieve little in terms of extra seats through the top-up lists (achieving between 0 and 2 at best in the 5 elections using this system).

This time around, the idiosyncracies of the system gave Labour 2 additional seats in there weakest region re constituencies – just one constituency AM out of 8 inMid & West Wales, despite poling less than Conservatives (0 top up seats due to winning 3 constituencies, and Plaid Cymru, 1 top-up to go with their 3 constituency wins). It also allowed Neil Hamilton to squeak in here with just 1500 more vote than the Lib Dem.

The point I am getting to is that with the exception of this region, where 45,000 Tory top-up votes were a waste, in every other region, votes for Labour were a waste, nearly 280,000 Labour votes, the most in every region bar Mid & West, achieved precisely zero AMs, while these regions yielded 6 colleagues for Neil Hamilton.

It would have been perfectly legitimate for Labour voters to have looked for better value from their vote – and for their party of choice to have helped them do this with some guidance.

In fact, Welsh Labour have influenced the outcome by deciding not to provide such guidance. Given that the polls were clear enough, then failing to head off the UKIP influx has to be interpreted as Welsh Labour being content with that outcome. And indeed, I believe that they are quite happy with it. Having the oddball collection of chancers, sleaze bags and uber-Toris in the Senedd can only make Labour look moderate and reasonable in comparison. From their perspective, that can only be preferable to having more eco-socialists in the form of PC and perhaps the odd Green present. This would only highlight the red-Tory truth of Welsh Labour under Carwyn Jones. Even extra truly-moderate Lib Dems would have done this too.

Thus, I for one, hold Welsh Labour responsible for this tainting of the Senedd. They could have done something about it. However, the sobering fact is that with 13% of the popular vote, that translates, under a truly proportional system, to …….. erm…. (big sigh) EIGHT seats. So perhaps UKIP are the only ones who actually got close to what they deserved!!

This means the battle to expose UKIP’s ideology and unsavoury under-belly has to be rejoined (Stand Up To UKIP) . Just don’t expect any help from Welsh Labour in doing so!