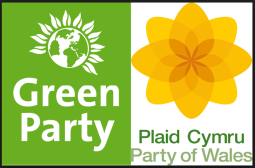 I have just been looking for opinion poll information since the General Election to see how the supposed progressive left parties have managed to build on their unprecedented media exposure.

The short answer is that neither Wales Green Party, nor Plaid Cymru have anything to boast about, sad to say, but Plaid Cymru would seem to at least be heading in the right direction, be it painfully slowly.

Looking at these polls from April 2014, from just before the ‘Green Surge’ in members kicked in and before the Greens, PC and the SNP announced their potential alliance in December 2014, the Greens initially saw a rise from their Regional Vote level in 2011 of around 5% to the dizzy heights of 7-8%, before plummeting back down to a disappointing 3% between the Welsh leaders debates and polling day. The latest figure of 4% is exactly where they were 18 months ago.

It is barely much better for Plaid Cymru. Their low point of 15% coincided with the Greens high point of 8% just after the ‘three party alliance’ was floated, but bounced upwards well from here to hover around 20-21% for the last 6 months. But again, this is no real advance on where the were 18 months ago (19%). In relative terms though, the PC:WGP ratio has gone from 2:1 in January 2015 to 5:1 in June 2015. This must reflect their growing strength within the progressive left of Welsh politics, even if the progressive left as a whole not really seen any advance at all.

The June 2015 poll also includes ratings of the party leaders in Wales. These are quite revealing too: 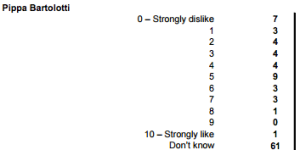 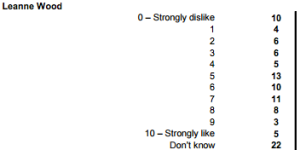 Perhaps most disappointing for Pippa is that despite two televised debates and considerable other media coverage 61% of the sample still don’t know her (at least enough to have an opinion on her).This means the scores of 0 – 10 for those that had an opinion on her are actually out of just 39. 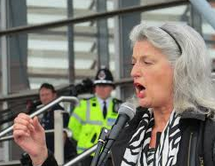 With a score of 5 representing a neutral (neither like of dislike) score, Pippa has 56% of varying degrees of dislike, 26% giving her the lowest scores of 0 or 1 out of 10. Just 20% give her any sort of positive like score, with only 2% giving her on of the top scores of 9 or 10 out of 10. With figures like this, it is probably just as well that 60% don’t know her!

Leanne’s scores have to be recalculated out 78 meanwhile, giving the following:

So we see that of those people that know them enough to have an opinion on them, more than twice as many people dislike Pippa than like her; whereas significantly more people like Leanne than dislike her. Her figures were comfortably the best of all the Welsh leaders. Only Carwyn Jones, of the others managed a small net ‘like’ score. Pippa’s were almost identical to UKIP’s Nathan Gill (all the way down in fact). Kirsty Williams scored a small net ‘dislike’ and Andrew Davies scored a significant net ‘dislike’, but not as bad as PB or NG.

It may be a bit too simplistic to conclude that Leanne is an asset to her party, whereas Pippa is a liability to hers, even though many may have suspected this for a long time, but as both parties strive for elusive breakthroughs at the polls that count, it something they probably both need to reflect long and hard about.

2 thoughts on “How are the Wales Green Party and Plaid Cymru doing in the polls since their unprecedented exposure in the General Election campaign?”