48 Labour MPs, including just 7 from Wales, defied Harriet Harman to vote against the Tory welfare bill, slamming its cuts to child tax credits and child poverty targets, despite orders from the acting leader and her party whips to abstain.

Leftwinger Jeremy Corbyn was the only leadership contender to defy his party whip and vote against the legislation, which aims to slash £12bn from welfare bills by cutting Employment and Support Allowance and reducing the benefit cap to £20,000 outside London.

During the debate, leftwinger John McDonnell, an ally of Mr Corbyn, declared: “I would swim through vomit to vote against this bill. And listening to some of the nauseating speeches in support of it, I might have to.”

The bill passed its first serious Parliamentary hurdle with a government majority of 184, as 124 MPs of all parties voted against the bill’s second reading, including all 56 SNP MPs. But 184 Labour MPs abstained. The SNP’s Pete Wishart instantly urged the Speaker of the Commons to change the seating arrangements of the chamber to reflect which party was now the ‘official Opposition’.

As far as Wales’ MPs are concerned, they voted as follows:

Plaid Cymru maintained solidarity with their SNP and Green allies in voting solidly against. It was also good to see Mark Williams, the only Lib Dem left in Wales, justifying the faith shown in him by the Ceredigion electorate. You got what you voted for in the Tory held seats (does anyone know if Chris Davies has a conscience or some other reason for abstaining?).

But what an utter shambles for Welsh Labour, in line with the national farce that is the Labour Party. 18 fell into line with the utterly and hopelessly out of touch leadership of the party, insofar as that even exists. Firstly, let’s acknowledge the few that did the right thing:

I have to say an especial well done to my own MP, Madeleine Moon. I have had cause to criticise her her before for not having the courage of her convictions and strength of character to defy the party whips. Let us hope this is an encouraging, long overdue, sign of things to come from her. As for neighbouring Ogmore, Huw Irranca-Davies better be prepared for plenty more ‘wanker Irranca’ taunts.

This is, of course hot on the heels of the vote to apply the Climate Change Levy, for which the only opposition in Wales came from the 3 PC and one Lib Dem MP. Not a single Labour MP did the right thing on that occasion. 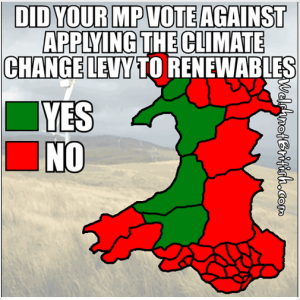 Welsh Labour are now beyond even a sick joke. They are a busted flush and beyond redemption. Even if Jeremy Corbyn were to win the leadership battle, that could only lead to the whole party imploding.

The Welsh public need to wake up fast to these realities. There is barely nine months until the Welsh Government elections, and it is patently clear from the votes discussed above, that Wales needs to recognise who it can really trust to act in its best interests.

It would be nice to think that Wales Green Party had its own Caroline Lucas waiting in the wings and on the cusp of victory next year. That is patently going to have to wait a while.

In the meantime, we need to see as many Plaid Cymru AMs elected as possible, try to regain faith in Lib Dems where they are best placed, and failing this, scrutinise the Labour candidates to see if they have the credentials to merit our support (my list does’t go much beyond Mick Antoniw at the moment!).

It is time to build a Welsh Ecosocialist Alliance, across party divides, and set Wales on course to become the fairer, cleaner and more prosperous society that it have always sensed it has sought to be. Labour has moved away from these values. It is surely time for the electorate to move away from Labour.