As we are all about to traipse to the polls to put our precious cross in the box of our choice, most of us know deep down that it is going to make naff all difference to our lives. I am less certain that many understand the real reasons that this is the case, especially after listening to people at a dinner party last night.

Most seem to ascribe it to the two-party dominance brought about by the FPTP voting system. Given that the two big parties, as in the US, are barely distinguishable in any meaningful sense, then there is never going to be much of a discernible difference apart from, perhaps, a few people around the fringes of society. On this basis, a Labour government may be seen as preferable a Tory one, in the same way that I would prefer to have my left arm chopped off, rather than my right arm.

The real problem, I would maintain, is that we are not voting for the real movers and shakers in the world today. As I explained in my last article,  both Conservatives and Labour are utterly beholden to big business and have become unwilling, perhaps even incapable, of doing anything about it anymore.

When I describe corporations as being essentially fascist, I mean it the sense that power goes strictly top-down, from the board of directors, through the management hierarchy, down to the people on the shop floor (the ones creating the wealth for those above them). Ultimately, the power rests with those that provide the initial financing; the investors, owners and banks. The bigger they are, the more powerful they are. Governments, in theory at least, can exert some constraints in terms of legal regulation and imposition of taxes, but the PR machine has made both these concepts ‘dirty words’ today. There are specific references in just about all the parties’ manifestoes about ‘reducing red tape’, as if that benefits me and you. All it does is free up businesses to do what the fuck they please, even more than they do already.

So what can we, the general public, do about it? We can try to be disruptive, within the confines of ever stricter legal restrictions. We can have a say at election time, but few are interested in listening, such is their resignation to the two-party hegemony. Beyond that we can choose who we work for and choose whose goods and services to buy, but even that assumes we have sufficient means to be able to choose more than the first and/or the cheapest on offer. From the corporations’ perspective, the extent to which they have to consider people at all, be it their workers or their customers, is to the extent that it impacts on their only real objectives – profit, market share and control of the system. 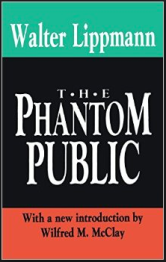 Thus we have a system that gives the illusion of being a functioning, participatory democracy, but the reality is anything but. Historically, the working class masses were referred to as ‘the rabble’. By the 1920s, Walter Lippmann’s “Phantom Public” was presenting a more sophisticated view of the electorate that still holds true today. The Phantom Public discusses the “disenchanted man” who has become disillusioned not only with democracy, but also with reform. According to Lippmann, the average voter is incapable of governance; what is called the public is merely a “phantom.” In terms of policy-making, the distinction should not be experts versus amateurs, but insiders versus outsiders. Thus he refers to me and you as the “ignorant and meddlesome outsiders” and suggests that we should be content to let the “responsible men” make the decisions while the “bewildered herd” are kept in line – spectators, at best, rather than participants in the ‘democratic’ process.

Thus, we will dutifully queue up next Thursday to ratify programmes that have already been decided and are well underway. The ‘governing’ party will have about one third of the the vote, in a two thirds turnout; somewhere between 20 and 25% of the electorate’s support. But it really matters not, very much, whether it be Cameron or Milliband heading the next government, nor whether it be in coalition with other neoliberals (the Lib Dems or SNP or UKIP), or with a whopping majority. The important thing is, we will be told, that we have had our say, that it is the will of the people, that they have been given a mandate. And thereby they can continue, claiming a legitimacy that is ephemeral at best.

This was kinda the argument presented by Russell Brand for not voting (until he came upon the argument about left arms and right arms I put earlier [para2], and has decided to back Milliband today!). I would probably go along with this argument about not voting if there were only neoliberal ‘status quo’ parties on offer, but that is not the case.

Although they are far from homogeneously so, there are genuine socialist and ecosocialist alternatives available. Bridgend is especially blessed, having a former communist standing for the Greens, along with an ecosocialist leaning Plaid Cymru candidate, a TUSC candidate and a former Green libertarian leftie Pirate candidate. Even with their votes added together, they will not win in Bridgend. All but one or two will lose their deposits. In places such as Ceredigion and Bristol West, however, PC and Greens respectively can conceivably nick seats off the establishment parties – and we should do our best to see that this happens.

These are the people to vote for – any one of them will do where none of them can win – as they all represent anti-establishment, anti-statu quo votes that reduce the legitimacy of the neoliberal ‘elite’. It is a positive vote for change, rather than an apathetic act of indifference.

(See: http://anotherangryvoice.blogspot.co.uk/2014/05/reasons-to-vote-alternative-2014.html Written in the context of last year’s Euro elections, but the analysis of the parties still stands )