I owe you all a number of apologies:

There is also a building situation developing over my stance regarding the Euro Elections. You will recall that I withdrew after securing the lead position on the ballot in order to support the campaign of Plaid Cymru’s MEP, Jill Evans to re-elected. She has been an outstanding member of the Green/EFA group in the European Parliament for 15 years (three successive terms) and is in some danger of losing her seat as a result of the Lib Dem vote crumbling and Labour and UKIP growing in support. I maintain the position that Green supporters should whole-heartedly be supporting Jill, given that voting Green instead could well allow Labour or (please, no!!) UKIP to take her seat. That would be a tragedy to anyone of a remotely eco-socialist disposition.

Perhaps not surprisingly, this has not gone down well in some quarters – with John ‘Enforcer’ Matthews already calling for my expulsion. A bit rich for someone that has overseen the demise of the once relatively mighty Cardiff Green Party, but he has form in pursuing the expulsion of ecosocialists!

So, the upshot of it is that this meeting will be the last, for a while at least, unless someone else wishes to take over organising them.

Given the situation, I feel that it is best that we revert to the Railway PH for this meeting as it is accessible location, should other than the regulars wish to make the effort and come along.

REMINDER – If anyone needs a lift to any of our meetings, let Andy know (greens@chyba.go-plus.net) and we will organise it for you. 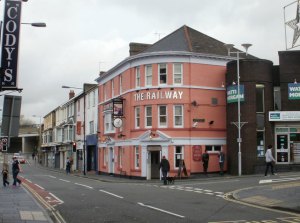